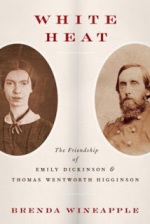 He had seen men enslaved, and seen death in battle on a terrible scale. So when a young, unknown poet named Emily Dickinson wrote to ask whether he thought her verse was “alive”, Thomas Wentworth Higginson – a critic for The Atlantic Monthly and a decorated Union veteran – knew he was seeing poetry that lived and breathed like nothing he had seen before.

Higginson was immediately awed by Emily Dickinson and went on to become her editor, mentor, and one of the reclusive poet’s closest confidantes. The two met only twice, but exchanged hundreds of deeply personal letters over the next twenty-five years; they commented on each other’s work, mulled over writers they admired, and dazzled each other with nimble turns of phrase. After she died, he shepherded the first collected edition of her poetry into publication and was a tireless champion of her work in his influential Recent Poems column for The Nation.

Later generations of literary scholars have dismissed Higginson as a dull, ordinary mind, blaming him for the decision to strip some of the distinctive, unusual structure from Dickinson’s poems for publication. However, Brenda Wineapple offers a portrait of Higginson that is far beyond ordinary. He was a widely respected writer, a fervent abolitionist, and a secret accomplice to John Brown’s raid on Harpers Ferry; wounded in the first year of the Civil War, he returned to service as colonel of the first federally authorized regiment of former slaves. White Heat reveals a rich, remarkable friendship between the citizen soldier and the poet, a correspondence from which Dickinson drew tremendous passion and inspiration – and which she credited, more than once, with saving her life.

Brenda Wineapple is the author and editor of five books, including the award-winning Hawthorne: A Life and Sister Brother: Gertrude and Leo Stein. Her essays, articles, and reviews have appeared in The American Scholar, The New York Times Book Review, Parnassus, Poetry, and The Nation. She teaches in the MFA programs at Columbia University and The New School in New York.

Emery Hall is a pen name for a Dallas-Fort Worth, Texas, USA area writer. View all posts by Author Emery Hall